4 Common Types of Ticks on Dogs and What to Expect

Dogs are active creatures that love to spend time outside. And while most open-air activities are harmless and can enhance your pet’s health, there are some things you’ll want to look out for.

As a pet parent, it can be scary to find unwanted critters on your dog. Especially since the tick population in the United States has grown quickly over the past decade.

This increase in parasites is due to many factors. A big shift in urban to rural living means people come into contact with ticks more often. And an increase in warm weather is extending the tick season.

So what does this mean for you and your dog? To keep your pet safe and prevent ticks, It’s important to have a good understanding of what ticks are and where they come from.

Ticks are more than an annoying part of your outdoor adventures. Ticks are a type of Arachnid (has eight legs) that survive on the blood of many animals, including humans and dogs.

Like mosquitoes, ticks are transmitters of disease. When ticks bite, the microbes carried in their saliva enter your dog’s skin and blood.

In the United States, there are two main families of ticks: hard ticks and soft ticks. Between both types of ticks, only a few bite and transmit disease to humans and animals.

*Soft ticks can have up to 7 nymph stages

The life cycle of ticks 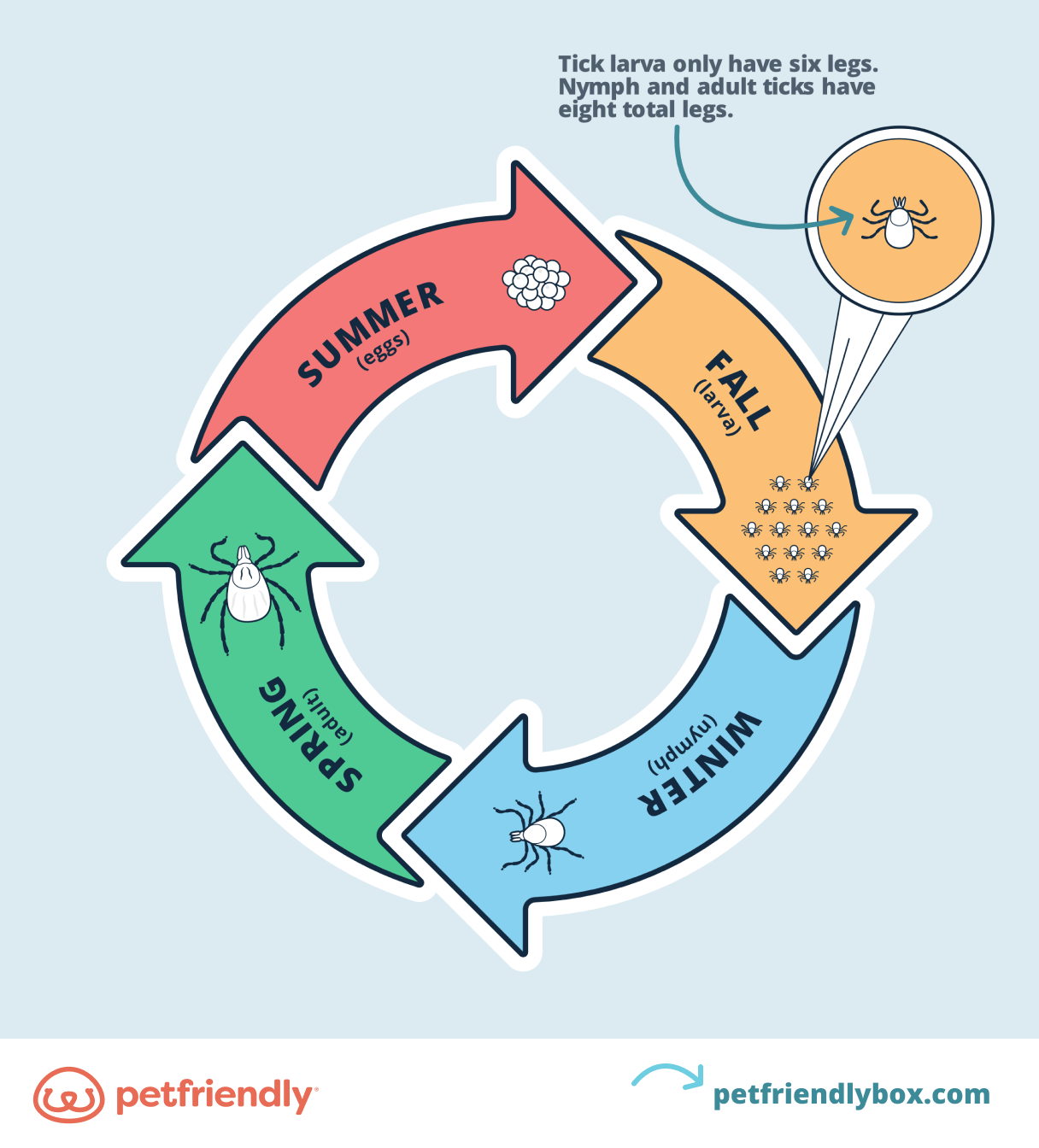 Hard and soft ticks go through different life cycle stages from hatching to adulthood. Most tick encounters happen with adult ticks, but they aren’t the only stage to be aware of when it comes to your pets.

Here are the most common stages of the tick life cycle:

All ticks start out as eggs. After feeding, female adult ticks drop off their host and lay anywhere from 1,000 to 7,000 eggs. For hard ticks, this stage can last a full year before hatching.

When tick eggs hatch they become larvae, sometimes called a “seed tick.” In the larval stage, ticks are tiny and difficult to see.

Almost all species of larval ticks look the same. So, identification can be difficult. One key characteristic of tick larvae is that they only have six legs.

Despite their size, tick larvae are equally capable of biting and infecting their hosts. Once hatched, larvae will either feed on their current host or fall off to find a secondary host, such as a small mammal.

By the time the larva develops another pair of legs, they become a nymph. Tick nymphs have pale-colored abdomens and hard ticks develop a rigid dorsal shield.

Nymphs feed on many hosts through their next life stages. This is due to:

This stage is when the typical markings and features unique to each species become visible, and people can better identify ticks. Ticks that have matured to the adult stage have:

The difference between adult female and male ticks 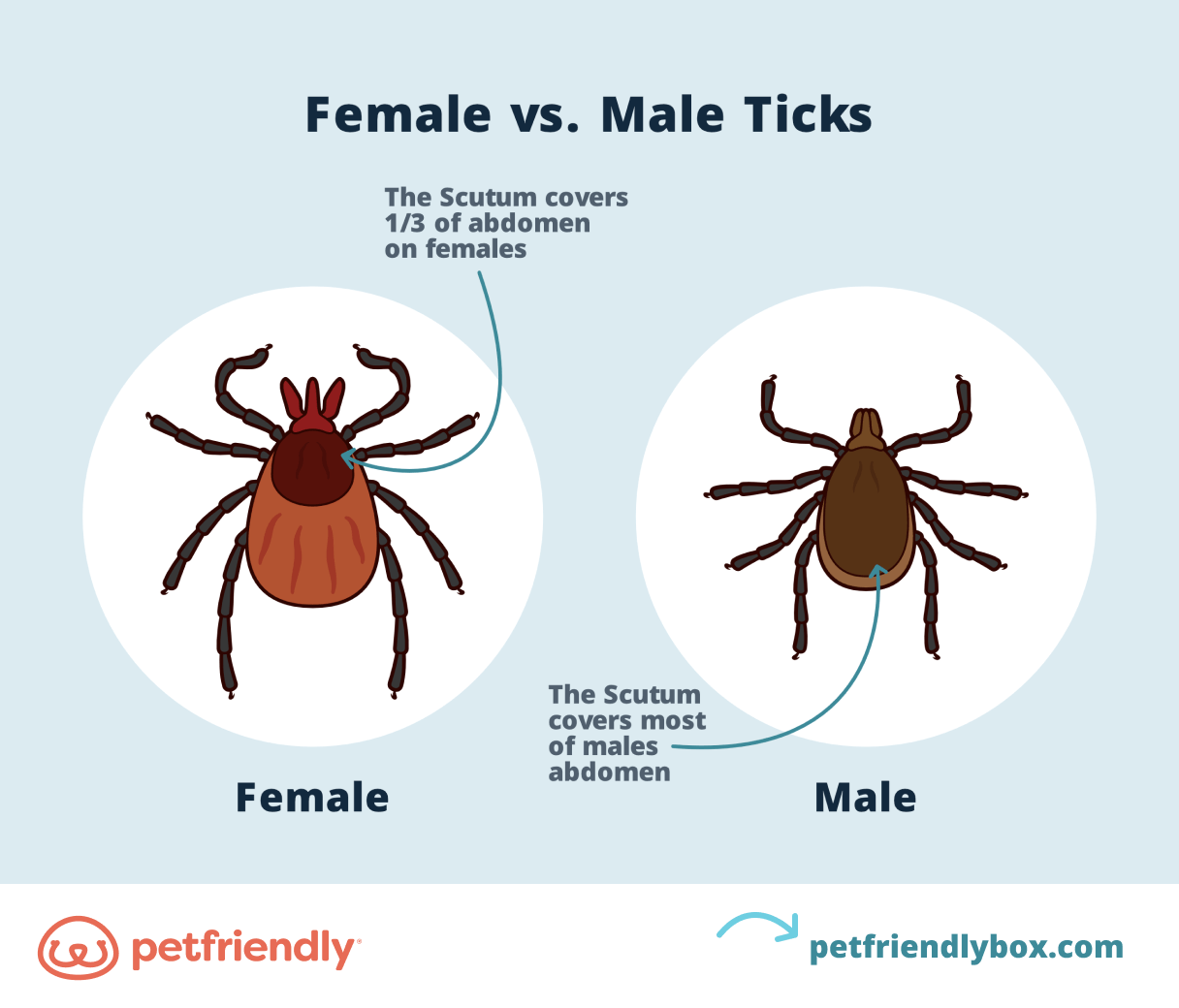 Identifying adult female ticks is important. Why? Females feed on the blood of their hosts, whereas males usually only attach. Therefore, females are most likely to share pathogens and disease.

To tell the difference between males and females, look at the size of their dorsal shield.

In all species, the male’s dorsal shield will cover almost the entire abdomen, while the female’s will only cover a smaller portion.

The 4 most common ticks on dogs 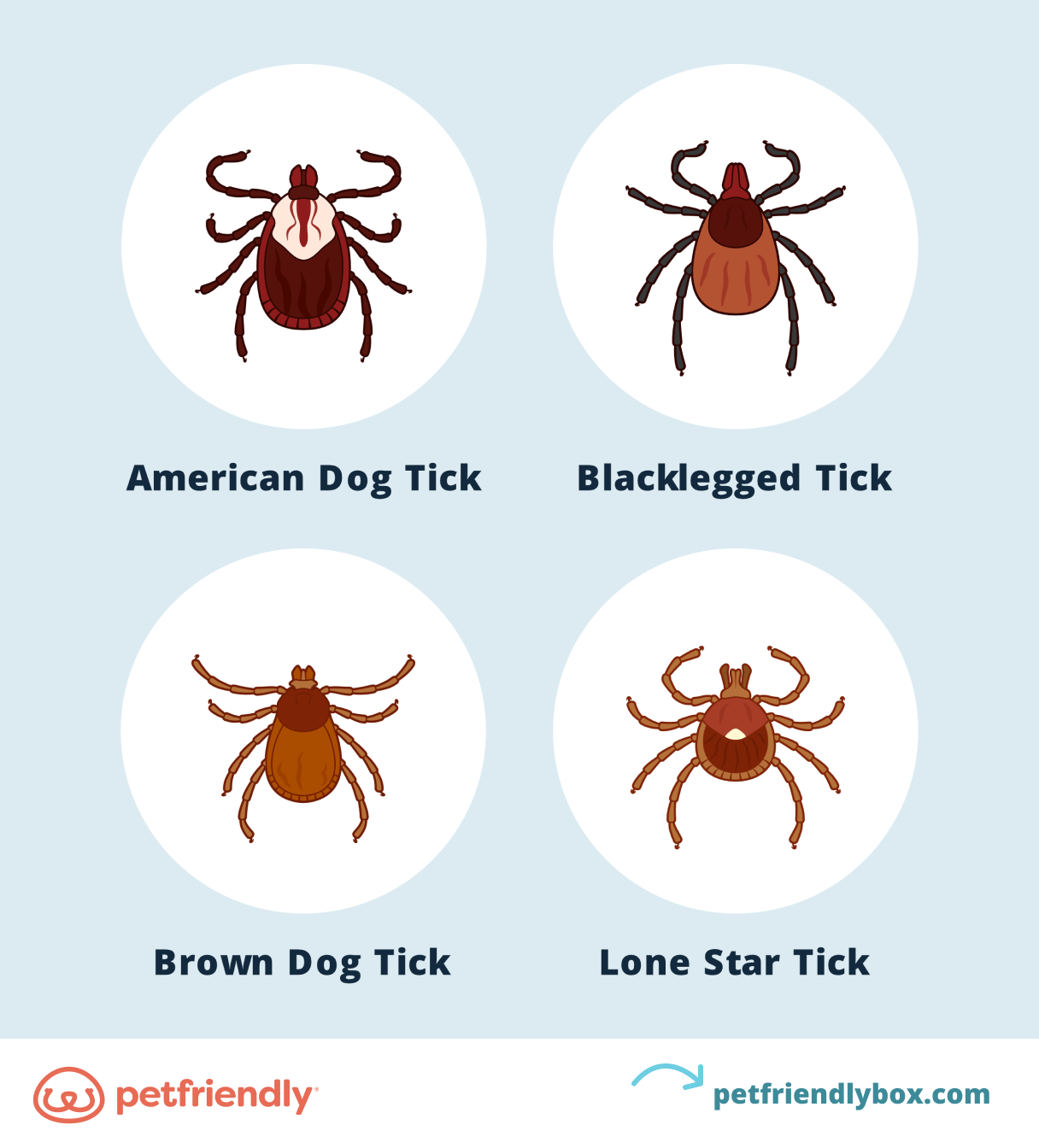 There are over 900 species of hard and soft ticks combined. Roughly 200 are native to the United States and only a few are a threat to you and your pets.

Ticks live in a variety of habitats. Each has different characteristics and functions. So what color are ticks, where can you find them, and how do you tell the difference?

Here are the four most common types of ticks on dogs in the United States.

Also called a wood tick, the American dog tick is most easily identified by the female. Adult female American dog ticks have large, off-white dorsal plates that stand out against the rest of their medium brown bodies.

Female American dog ticks can grow up to a ½ inch long after feeding—about the size of a blueberry. Both females and males have distinct white or silver markings on their backs.

The American dog tick lives east of the Rocky Mountains and in parts of the Pacific Coast. This tick is most commonly found in wooded areas near roads and trails where brush, twigs, and tall grass are present.

The peak season for the American dog tick starts in the spring and can last all year depending on the region.

Despite their name, they are one of the most common ticks to bite humans. In addition, their need to feed is much less than other ticks. They can live up to two years without food which makes them a larger threat to dogs, deer, cattle, and more.

The blacklegged tick is native to the eastern United States. In line with tick season, this region is more at risk during warmer months. However, adult ticks need a host to survive and may search through above-freezing, winter weather.

Although deer and other forest wildlife are the primary victims of a blacklegged tick, dogs are also susceptible to the occasional bite. Blacklegged ticks can also transmit canine diseases.

The brown dog tick, or kennel tick, is a light brown color. Unlike other ticks, its shape is more narrow.

This species of tick resides worldwide. Though it can survive in nature, it primarily lives in homes near dogs—like dog beds, kennels, and crates. In fact, brown dog ticks can survive entirely indoors which makes them a year-round risk for your pet.

Similar to the blacklegged tick, the brown dog tick seeks mid-sized mammals like dogs as its primary host. As a result, brown dog ticks may transmit canine ehrlichiosis and babesiosis to your dog.

Take precautions if your dog encounters this tick. Each of these infectious diseases can be severe in certain breeds:

The lone star tick is a type of hard tick with a reddish-brown color. This tick gets its name from the adult female which often has a white dot, otherwise known as a “lone star,” on its back.

You can find the lone star tick throughout the U.S. but it is most commonly found in the South, especially in wooded areas. Lone star ticks can be aggressive when trying to find a host and typically search throughout the warmer months of the year.

While lone star ticks aren’t known to transmit pathogens that contribute to tick-borne disease (like Lyme disease), a bite from this tick can carry ehrlichiosis. If left untreated, this disease can:

When, where, why, and how dogs get ticks

No matter what stage of pet parenting you’re at, a tick encounter can leave you asking more questions than you have time to research.

Here’s what you need to know about the ins and outs of ticks on dogs.

When do dogs get ticks?

In the United States, peak tick season starts in the spring and summer months and can last through the fall. The big question is can dogs get ticks in the winter?

Especially in states where winter weather rarely or never reaches freezing, ticks can remain a threat. If the ground isn't frozen, ticks can be active. And in many cases, both can survive entirely indoors year-round.

Where do dogs get ticks?

Ticks aren’t limited to the contiguous United States, but they do have distinct regions in which they are native.

Beyond the region, ticks are usually found in forests, parks, and other tree-ridden areas. No matter how long you spend outdoors with your dog, make sure you check for ticks before entering your home.

Why do dogs get ticks?

To survive, ticks need a host. A regular feeding schedule allows them to continue in their life cycle.

Like humans and other warm-blooded animals, dogs are hospitable hosts for a variety of ticks. Dog’s thick, but inhabitable fur makes it easy for ticks to latch on and stay put to feed and breed.

How do dogs get ticks?

Ticks seek their hosts through animal smells and sounds, such as:

Luckily, ticks cannot jump or fly, but they can crawl. Ticks “quest” for their hosts. These sneaky critters rest on leaves and grass along well-used paths and stretch out their front legs to climb aboard a passerby. Some ticks attach right away, but others may crawl to more secure areas.

What to do if your dog has a tick

A tick bite can drastically affect the life of your dog. Consider these tick preventatives for keeping your pet safe around ticks.